"Most scientific problems are far better understood by studying their history

Christopher Bassford graduated from the College of William and Mary with a BA in History and Academic Honors in Interdisciplinary Studies for a dissertation on tactical nuclear weapons. He obtained an MA in American diplomatic history from the Ohio University before serving five years on active 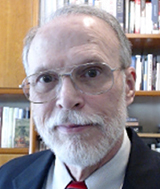 duty as a U.S. Army field artillery officer, with tours in Korea and Germany. He then completed a Ph.D. in modern European and military history at Purdue University before accepting an Olin postdoctoral fellowship in national security studies at the Ohio State University. Subsequently, he was director of studies in the theory and nature of war at the U.S. Marine Corps Command and Staff College, then associate professor of national policy issues at the U.S. Army War College. He returned to the Marine Corps orbit as a concepts and doctrine analyst for Marine Corps Combat Developments Command. He then served as Professor of Strategy at the National War College, in Washington, DC, for twelve years. He is now Professor of International Security Studies in the College of International Security Affairs' Joint Special Operations Master of Arts (JSOMA) program at the Special Warfare Center at Fort Bragg, NC. As an independent consultant, writer, and lecturer, he has written scholarly books, military concepts and doctrine, as well as articles for the popular press, and spoken to audiences as varied as UVA's Darden School of Business, the George C. Marshall Center for European Security Studies (in Germany), and the Boston Consulting Group.

Dr. Bassford is the author of several books, including The Spit-Shine Syndrome: Organizational Irrationality in the American Field Army (Westport, CT: Greenwood Press, 1988) and Clausewitz in English: The Reception of Clausewitz in Britain and America, 1815-1945 (Oxford University Press, 1994). He is one of the editors of the Boston Consulting Group's business-oriented Clausewitz On Strategy: Inspiration and Insight from a Master Strategist (New York: Wiley, 2001), and also conceived and edited Carl von Clausewitz and Arthur Wellesley, 1st Duke of Wellington, On Waterloo: Clausewitz, Wellington, and the Campaign of 1815, eds. Christopher Bassford, Daniel Moran, and Gregory W. Pedlow (Clausewitz.com, 2010). As a Marine Corps concepts and doctrine writer he authored MCDP 1-1, Strategy, MCDP 1-2, Campaigning, MCWP 5-1, Marine Corps Planning (Draft), MCWP 2-15.3, Ground Reconnaissance Operations (Draft, 1998), and MCWP 3-2, Aviation Operations (Coordinating Draft, 1998), and participated in the writing of several other USMC and Joint concepts and doctrinal publications.

Dr. Bassford's purely academic work concentrates on the reception of German military philosopher Carl von Clausewitz and his impact on strategic thinking in the English-speaking world. He is particularly interested in the relationship between Clausewitz's theories and concepts from the field of nonlinear science, a field which is having a great impact on modern thinkers in areas ranging from business and subatomic physics to economics, archaeology, and evolutionary biology. His current focus is the possible nexus between modern evolutionary theory and the effective use of "big picture" history in strategic education and thought. He is also the editor and webmaster (since 1995) of Clausewitz.com and, more recently, of ClausewitzStudies.org. See personal statement.